Laser Treatment for Acne Scars Reviews: If you’re struggling with acne and acne scars, even as an adult, don’t worry because you’re not alone. Acne breakout can be frustrating, but the blemishes they leave behind can be even more frustrating for most people. Scars are a little tougher to deal with and take longer to heal. Good thing, scar treatments have come a long way. Acne scars no longer have to be permanent as there are laser treatments that can help get rid of them. 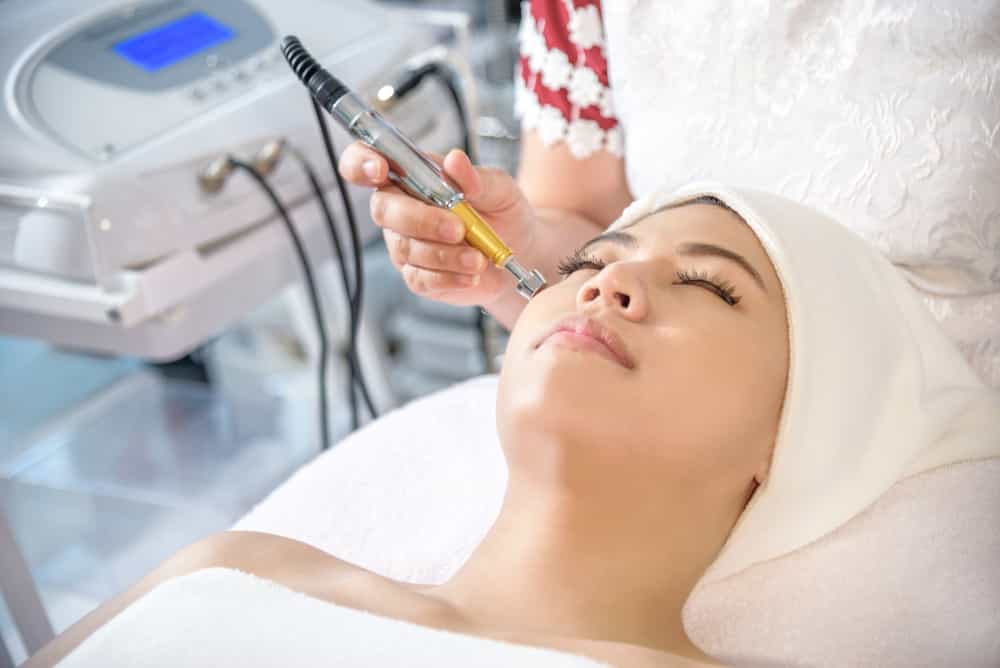 How are the Acne Scars Formed?

Some scars make us proud, maybe because it tells a cool story or is a reminder of something we’ve overcome. But acne scars are different. These stubborn scars are caused by an inflamed lesion, pimple, or cyst. They happen when excess oil, dirt, and dead skin cells clog the pores and become a breeding ground for acne-causing bacteria.

The infected pore will eventually swell and rupture the follicular walls which destroy healthy skin tissues. Your body will naturally produce raised areas (hypertrophic or keloidal scars). For some, acne scars cause a depression in the skin (atrophic scars), when there is tissue loss during the recovery process.

Inflammatory acne, such as cyst or nodules, most likely lead to long-term scarring as it affects deeper layers of the skin. An individual may also become more prone to acne scars for several reasons: genetics, not treating acne immediately, and picking at acne, which causes more trauma to the skin.

Some treatments are more effective for specific kinds of acne scars. It is best to identify what type of scarring you have to get the most suitable treatment.

These scars give a wavy texture to the skin. They are much shallower, and the edges are usually soft and smooth. Rolling scars are caused by long-term inflammatory acne. They can get worse as you get older and when the skin loses its natural elasticity.

These are depressed scars that are typically narrow yet deep. This happens when the skin loses collagen, leading to the collapse of the overlying skin and leaving a puncture or ‘hole’. The skin looks like it was pierced by an ice pick, therefore the name. They are results of cystic acne – the worst kind of acne that is deep and painful.

Somewhat alike with icepick scars as they are pitted, but boxcar scars are shallower, broader, and have sharp vertical edges. Boxcar scars are common aftermath of inflammatory acne and are often seen on the temples and cheeks. Since they have steeper edges and are more distinct from the surrounding skin area, they’re quite challenging to treat.

Although not really a type of scar, it is the dark mark left by the previous acne. This happens when the body produces too much melanin, which gives the skin pigment.

How Do laser Treatments Work?

Light Amplification by Stimulated Emission of Radiation, or LASER, uses an intense focus pulse of radiation. Acne scars have both textural change and discoloration – which both can be addressed by laser treatments. The intense light from the laser penetrates into the skin, layer by layer. This encourages collagen production and cell regeneration. Think of it as resurfacing the damaged parts of the skin, but instead of targeting the outer layer, the treatment is done from underneath the skin.

The laser only affects tissues that absorb its energy, reducing damages in the surrounding areas. Laser treatments can either stimulate activities in the body or get rid of cells to improve the targeted area.

Get the facts here about lasers — process, costs, and reviews.

Non-ablative lasers, on the other hand, help blend acne scars through heating the skin and encouraging collagen production in the deeper layers of the skin. It only targets the dermis. Instead of removing scar tissues, it promotes the remodeling of connective tissues to improve skin conditions. These are most effective for pigmentation and mild acne scars. However, there are non-ablative treatments that will enhance raised scars, too.

This laser treatment delivers heat in a controlled and predictable manner to encourage scar remodeling. It uses a variety of microbeam densities and sizes that will suit the patient’s condition. Ultra-short pulses of light are delivered deep into the skin, layer by layer, to create micro-cavities in the targeted area. This triggers the body’s natural healing process which produces collagen and elastin. These fibers are the building block of a healthy, younger looking skin.

Radiofrequency and micro needling are known treatment technologies that effectively target acne scars. INFINI uses both technologies, which makes it extra effective. The RF energy is delivered through insulated microneedles, reaching a depth of 0.5mm to 3.5mm. This encourages collagen remodeling, which then improves the scar tissues.

Unlike other treatments, despite it involving microneedles, INFINI only requires less downtime. The insulated needle where radiofrequency waves pass through doesn’t damage the skin’s surface. This treatment also works best in deep scars like icepick scars and rolling scars.

INFINI can also improve other skin issues like wrinkles and laxity. The heating of the dermis during the procedure stimulates collagen production, which treats sagging skin, fine lines, and improves pores.

Edge One Fractional CO2 Laser uses fine beams which cause minimal redness and scabs that are barely noticeable. It uses a laser beam that is highly concentrated to interact effectively with the targeted tissues. This treatment delivers energy deep into the skin, which causes narrow ablation zones which prevent heat from reaching the surrounding healthy tissues. Since the ultra pulses are very accurate, it doesn’t damage the surrounding tissues.

Edge One Fractional Lasers are also a lot quicker compared to other laser treatments. This minimizes the amount of time the skin is exposed to heat. The traditional fractional lasers cause redness and scabs to patients and may last from 3 days to a week.

Intense Pulsed Light effectively treats pigmentation, rosacea, spider veins, and minor sun damage. This treatment is most useful for post-inflammatory hyperpigmentation. It is a non-surgical laser procedure that doesn’t require anesthesia and is done for about 20 minutes. IPL uses a high-intensity light that heats up targeted areas. The short laser pulses are used to deliver a burst of energy underneath the skin. This repairs damage to the melanin that causes pigmentation and also boosts the body’s natural collagen production.

IPL is not limited to treating acne scars, in fact, it can also address acne breakouts. The light produced kills acne-causing bacteria and treats inflammation. IPL somehow makes the sebaceous glands produce less oil – and less sebum means less acne. The skin is also able to shed properly, which reduces the risks of glands getting blocked with oils, bacteria, and other toxins which causes acne growth. Patients generally see results after 3-5 sessions of IPL. Redness may be experienced following the procedure, but this will only last for a short time.

This effectively improves scars, especially associated with the erythema. PDL also enhances the appearance of depressed scars such as icepick, atrophic, and boxcar scars. The dye is used to generate different colors of laser beams, and laser energy is delivered in pulses which pass through the skin layers. PDL uses a wavelength of 595nm and is absorbed only by the blood cells in the targeted area, and not by the surrounding tissues. This causes less damage and quicker healing.

This treatment uses a beam that is more easily absorbed by water, which is abundant in the body. Erbium is known for minimally burning the surrounding tissues, comes with fewer side effects, and faster healing time. This is recommended for dark-skinned patients who may experience discoloration from CO2 lasers.

This works by eliminating damaged cells on the skin’s surface, to give way for new skin to form. Since Erbium is photomechanical in nature, when it destroys targeted cells, the heat doesn’t dissipate into the surrounding tissues. However, this focuses more on treating the epidermis and not the deeper layers. It doesn’t stimulate collagen production, which is needed if you want that skin tightening effect.

Are there any Risks or Side Effects?

Temporary redness is a common side effect during recovery time. This usually goes away after a few days. The best way to deal with this is to be gentle with your skin and leave it to heal on its own. Mild swelling can also occur to some but will also subside in a matter of days. Doctors usually prescribe medications to help with the swelling.

Hyperpigmentation is a less common side effect of laser treatments that usually happens to darker skinned individuals. This is why it’s important to have a consultation so your doctor can identify whether you are the right candidate or not. There are rare cases of serious risks such as temporary and permanent scarring.

What You Should Know Before Having Laser Treatment for Your Scar

It’s important to consider a few things to reduce the risks and avoid side effects from laser treatments.

Before anything else, it is important for the specialist to know more about you. Everyone is unique. Particular laser treatment may work effectively on one patient, but not as well to the other. To identify the best treatment for your condition, the specialist should consider your skin type, type of scar, allergies, and overall health.

Results depend on the skills of the specialist:

The experience of the doctor plays a significant role in the likelihood of experiencing side effects. Always do your part and research for qualified and experienced doctors before undergoing treatment.

Although laser treatments use advanced technology, acne scarring is still a difficult skin issue to correct. You may be required to undergo a few more laser treatments for long-lasting and optimal results. This is common for non-ablative lasers. They may not have much downtime, compared to ablative treatments, but they will require more sessions to see desired results. Each treatment stimulates the production of collagen, which leads to better results.

To help reduce the risks of side effects, you may need to adjust your lifestyle for best results. It is recommended to stop using skin care products and medications with certain ingredients before undergoing treatment. Activities such as smoking and tanning should be avoided, too.

Doctors usually give patients instructions for immediate care to avoid side effects from emerging and for better results. The recovery time will depend on the patients and the type of laser treatment they went through. Follow-up procedures are also recommended for best results. It is usually advised to avoid sun exposure for some time until the skin has totally healed. The sun’s harmful UV rays can lead to another scar.

A slight improvement can be seen immediately, but the actual results from laser treatments are usually seen after a few weeks or months. This will depend on your skin condition and the type of treatment you had.

If you’re considering laser acne scar treatments, it is best to look for a skilled and experienced doctor.